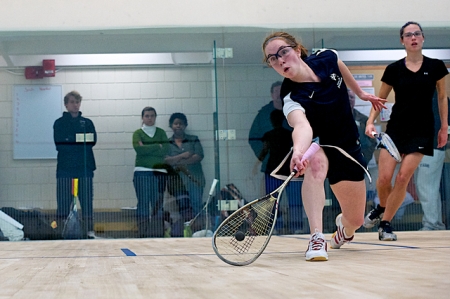 The CSA Ann Wetzel Award was given on Saturday to the women’s college player who started playing squash at college – not even a single lesson or game is allowed in order to qualify for the award – Smith college’s Clair Oblamski! 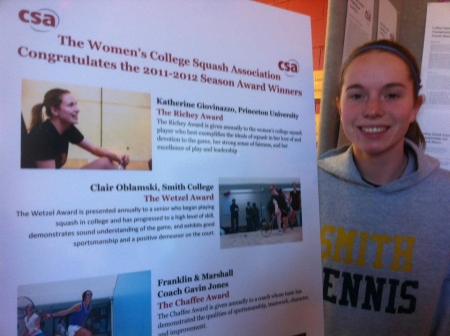 Clair only actually played for two and a half semesters, making her achievement even more remarkable.  She beat last year’s winner, Amherst’s Mimi Bell 3-0 just before her junior semester abroad in Denmark (where she had no access to squash courts). A captain on both the Smith College Tennis and Squash teams, Clair played won her first match at the #7 spot in the fall of 2009, and her last match at the #2 spot, leading her team to a 5-4 win over William Smith in the 2012 CSA Epps Cup final at Harvard University on February 26, 2012.  More specific details on her progress can be found here.  Here is a short interview with Clair after her first college squash match – at the end of her first week of squash:

Clair interned at StreetSquash in the summer of 2011, and although she is a CSA Scholar-Athlete and a double major in Neuroscience and Psychology, following graduation, she will be seeking a position with one of the NUSEA programs.

A historical note that Smith College has had more Ann Wetzel winners than any other college in the CSA since its inception in 1995: 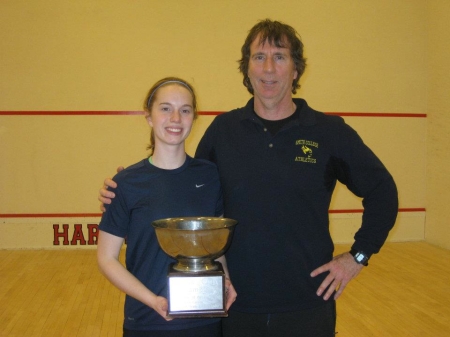 **Note that Smith’s Patty Jang, a 1998 nominee, did in fact beat the 1998  Wetzel Award winner according to CSA Ranking Rules (2-1 overall having won the most recent match), was a three-year co-captain of the squash team, and an exemplary sport with excellent technique (shot-maker style of play).**

This entry was posted on Wednesday, February 29th, 2012 at 2:31 am and is filed under Uncategorized. You can follow any responses to this entry through the RSS 2.0 feed. You can leave a response, or trackback from your own site.